Has medical technology become advanced enough to make fiction fact and dreams reality? Has medicine made enough developments to defy the almighty transcendent? With the possibility of a human head transplant being performed in the near future, there have been speculations of the creation of an “artificial” individual like the monster from Mary Shelley’s book, Frankenstein.

Many attempts at artificial transplants of organs such as the skin, liver, and heart have been successful. For example, a revolutionary medical event occurred when Patrick Hardison, a 41 year old firefighter who suffered from severe burns, was able to receive a full face transplant surgery in August 2015. 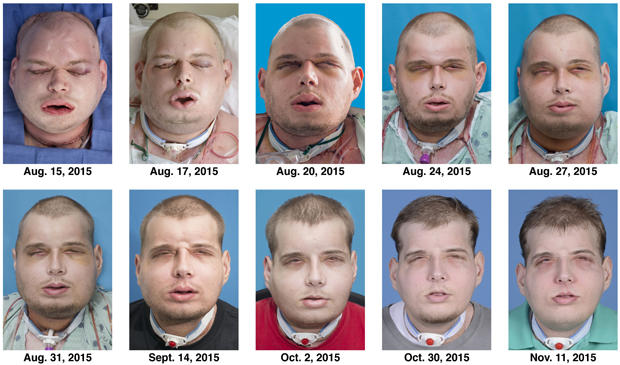 Figure 1. The progression of Patrick Hardison’s face after the surgery.

Therefore, why can’t a head transplant become viable with the rapidly evolving technology of the modern era?

Surprisingly, a head transplant was already performed by a group of neurosurgeons led by Dr. Robert White in the 1970s. The team was able to transplant the head of a living rhesus monkey into the body of a beheaded rhesus monkey through rapid stitching of both entities. However, this experiment could only loosely be called a success.

Figure 2. The head of the rhesus monkey during the surgery.

When it awoke after the surgery, the head had expressions of great pain, confusion, and anxiety. With the disconnection of the spinal nerve fibers, the monkey could only react to stimuli, smell, hear, taste, and see. However, it was not able to digest the food it was given and was paralyzed from the neck down. After eight days in this dismal state, the body’s immune system rejected the transplant and the monkey met its end.

In conclusion, Frankenstein’s monster could not have a pet monkey.

Despite the warning of not repeating a head transplant from Dr. Jerry Silver, a neurologist who participated in Dr. White’s surgery, an Italian neuroscientist from the Turin Advanced Neuromodulation Group named Dr. Sergio Canavero plans to perform a human head transplant in December 2017, which is only about two years away.

Canavero believes in Dr. White’s statement that “…with the significant improvements in surgical techniques and postoperative management … it is possible to consider adapting the head-transplant technique to humans.” This modern day Dr. Frankenstein has outlined a possible procedure called HEAVEN-GEMINI that will allow for the connection of the donor’s and recipient’s spinal cords.

The head anastomosis venture, or HEAVEN-GEMINI, is a complex surgical procedure that involves the cooling and cutting of both the recipient’s and donor’s spinal cords in a way that would allow anastomosis to occur. To spare you of the confusing and complex medical terminology Canavero uses in his outline, I will summarize the procedure here:

Anastomosis is simply “a surgical connection between two structures,” which in this case, are the brain and the spine. This would allow for minimal tissue damage and nerve fusion that was not a component of Dr. White’s rhesus monkey surgery. Grey matter interneuronal networks, or in other words, the networks in the spine that relay information to the body, are kept functional during and after surgery with low level electrical stimulation.

To keep the body healthy, different types of support such as anesthesiologic and thermal will be given to both the donor and recipient during the surgery. Canavero outlines the procedures to be followed post-surgery, also.

After the surgery, the individual must remain sedated in a cervical collar under intensive care for maximum recovery. When the individual wakes up, measures need to be taken in order for him or her to get used to the new body and establish their identity. The healthcare team responsible for the individual must maintain a positive relationship with him or her to ensure intellectual and emotional growth and help during times of stress and anxiety that can be related to the procedure, recovery, and/or the new body. We wouldn’t want the individual to be in an unstable emotional state like Frankenstein’s monster, right?

The concept of HEAVEN-GEMINI does seem viable. Canavero explains in elaborate detail the steps of procedure and the conditions that have to be met for the surgery to be successful. This shows that he is knowledgeable about this topic and the medical field overall. Theoretically, the surgery will allow the patient to function normally due to the connection between the spinal cord and brain instead of being immobile and unable to eat like the rhesus monkey in Dr. White’s experiment. In addition to that statement, the recipient may be able to live a prolonged life, instead of just a few days. Furthermore, this procedure doesn’t use the elementary technology of Dr. White’s time. Canavero will use cutting-edge technology to fuse the head and body together, instead of just rapidly stitching them together.

This seems like a medical miracle, right? Cut off some heads, put ‘em in some bodies, and save the day! (Or solve paralysis, at least.)

It’s not false that this procedure would create great leaps in the medical field. Other than paralysis, this gives amputees the chance to regain their lost body parts and “brain dead” or beheaded victims a second chance at life. Additionally, it could lead to the creation of a superior human. However, a miracle does come with complications.

First, let’s delve into the moral and philosophical issues of this medical wonder. He or she consists of two entities: the donor (body) and the recipient (head). Would the person be one of the two, both, or have a new identity all together? Once the identity issue has been solved, there is the question of how he or she will be treated morally, legally, and socially. Essentially, the patient is a “new being” with this being the first known successful head transplant for any entity. Will the patient follow societal norms or will a new set of rules be made specifically for that individual? The major moral concern of this procedure is the fact that we may be violating God’s will. By performing this experiment, are we trying to exceed the limits a transcendent has put on us? If we are, would this spell doom for humanity?

In addition to these ethical and philosophical questions, many medical doctors and scientists have been skeptical about this procedure. Dr. Thomas Cochrane, a director of neuroethics at Harvard Medical School stated that it will be impossible for Canavero to gather enough evidence to go through with the surgery and that there is no guarantee that the recipient will have a better lifestyle post-surgery. Dr. Michael DeGeorgia, a neurologist at University Hospitals Case Medical Center argues that head transplants may be feasible in the far future, but in decades, not in two years with medical technology as it is now.

Will Frankenstein’s monster be able to have a friend since it couldn’t have a pet?

In my opinion, hopefully not. (Sorry.) There have been numerous amounts of science fiction movies that emphasize that this is a dangerous idea. I don’t want to deal with the extinction or endangerment of humanity with the creation of a superior being, either.

What’s your opinion? Would you want a second chance at life or do you think Canavero lost his head?